We take our duty and obligation to safeguard and protect all people extremely seriously, and we have adopted the national Church of England's robust safeguarding procedures and guidelines. If you or anyone you are in contact with would like to talk with someone independently, please call the Safe Spaces helpline on 0300 303 1056
or email safespaces@victimsupport.org.uk Alternatively, you may contact the Parish Safeguarding Officer Gill Povey-Robins on 07970983308 or the Diocesan Safeguarding Adviser in the Diocese of Chester, via email or phone: 07703 800031.

Located in the rural village of Higher Walton, surrounded by a colourful variety of trees, flowers and shrubs, St John’s Church is an acknowledged gem which has the appearance and polish of a miniature Cathedral.

Our founder and benefactor was Sir Gilbert Greenall. Bart. (1806-1894). It is said that having done so much for surrounding parishes, he felt that the parishes of Higher and Lower Walton should have their own Church. Stockton Heath and Daresbury were too far away so Sir Gilbert decided to build, at his own expense, a church at Walton on that part of the estate on which most parishioners lived and worked.

The style of the Church is decorated Gothic, built of Cheshire sandstone, and dominated by a spire which rises to a height of 130 feet. The outer walls of the tower are relieved by alternate squares in two colours, giving a check board effect. The cruciform plan is well defined, with four large arches at the Crossing that support the tower, which is 24 feet square. The Nave is 78 feet long and the Chancel 37 feet long and 20 feet wide. 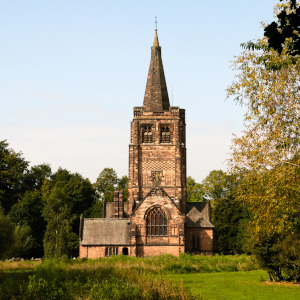 The architects chosen were among the foremost of the day, Paley and Austin of Lancaster for their ability to provide interesting varieties of style. One moment we meet pure Gothic, then Early English or Perpendicular. Such, however, is the unity of the whole that there are no clashes of style throughout the church.

The sole contractor was Mr. R. Fairhurst of Whitley, and the Clerk of Works Mr. Perkins. The total cost was £17,500. and if that seems trivial enough today, it was an enormous sum even in the late 19th century. The cost of a similar building today, even if the craftsmen could he found, would he in excess of a million pounds.

The original window was as follows, In the heads of the three lights, on ruby shields, surmounted on crowns, are several sacred monograms. including. 1. (Jesus, Saviour of Men)”. The rose foliage surrounding these shields flows through the tracery. and in the quarries below are the Apostolic and Evangelistic symbols of St. John, the eagle and the dragon.

On the death of Toby Daresbury, 2nd. Baron the family had this window replaced and it now depicts , along with an angelic host in the upper part of the window, a pictorial representation of the man, his coat of alms and his many interests and pastimes.  These include the usual outdoor activities associated with the landed gentry  and his association with English Freemasonry. ( Gilbert Greenall had a Masonic Lodge named after him and that lodge still meets at the Masonic Hall in Warrington to this day ).  The inscribtion at the bottom of the window reads :-

A much loved Countryman and Great Sportsman

Of the three windows at the top the left has an Alpha at the top, the right has an Omega and around the angel in the centre window is written :- Love one another As I have loved you.

West Side, North Transept: This is a similar window to the one opposite and depicts the Blessed Trinity. In the centre is God the Father, hand outstretched to help and to bless. On the left is the Son, symbolised by a Lamb. and on the right a holy Dove, emblem of the Holy Spirit, and is summed up with the Blessed Trinity in the form of a triangle.

East Side, North Transept: In the Chapel the window heads are filled with emblems of the four Evangelists. The Angel represents St. Matthew. the Lion. St. Mark. St. Luke. a bull, and an eagle for St. John. The window contains the monograms. SM. SL and SJ.

This contains the memorial window of the young Gilbert Greenall who was killed in 1928, carried out to a design by Frances. Lady Daresbury and dedicated in 1929. It is a fine example of modern craftsmanship and art by Morris of London, and its glowing colours, deeper than is usual in the rest of the Church, hold an eternal radiance. The central figure is of St. George in shining Armour, his foot on the dragon. looking upwards. his right arm, sword in hand, pointing to the sky. The face (from a photograph) is a portrait of Gilbert (the original is in the Choir Vestry). Groups of angels on either side look upwards. sounding their golden trumpets. The golden light of Heaven shines on all the figures. who stand amid forget-me-nots and carnations. In the three lower lights on either side of the Daresbury arms are those of Eton and the Life Guards. It is a moving memorial.

West Side, South Transept: In the tracery are shields representing the Christian Graces. On scrolls around the wreath are various texts together with a Cross (Faith) an Anchor (Hope) and a Heart (Charity).

Chancel, North Side: Here are two light windows, in one of which there is a lily plant painted on white quarries. In the upper part are kneeling angels who look up at the Sacred Lamb in the tracery above with scrolls of the text. Worthy is the Lamb that was slain”. The corresponding windows have varying designs: the border has the Eagle of St. John. whose name is inscribed amid rose foliage. In the tracery is a pelican, her piety being a symbol of Divine Love. The angels below bear the text, “Unto Him that loved us and washed us from our sins in His Blood. To Him he glory and dominion for ever and ever, Amen”. 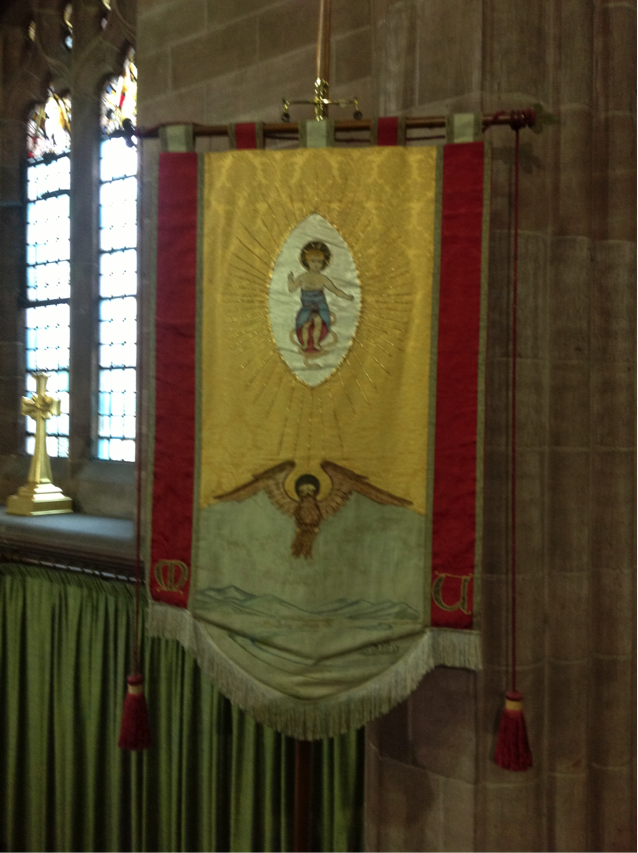 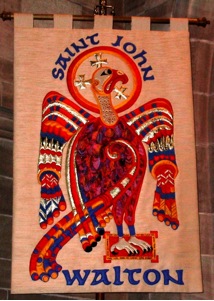 In the Lady Chapel there are two banners, the Sunday School and the Mothers’ Union Banners. The Sunday School banner is a richly embroidered silk tapestry, the work of Mrs. Olive Fauset, and depicts St. Christopher holding the Christ Child

A further banner in the name of our Church, St. John the Evangelist, stands at the entrance to the Church. It depicts an Eagle representing St. John, the messenger of the Word of God. The text around the eagle’s feet proclaims:“Those who hope in the Lord will renew their strength. They will soar on wings like eagles.” Isaiah 40 v 31. It was commissioned by the family and friends of S. Gilbert Robinson (1917 - 1994), and designed and worked by Andrea Higginson of Little Budworth.

The design of the banner is based on that found in the Book of Kells. The heart and feathers were inspired by the quotation, “I am in the heart of God” - and in James 4, “The nearer you go to God, the nearer He will come to you.” Come closer and see for yourself the golden cord which leads to the heart. Abbess Hildegard of Bingen’s twelfth century contemplative prayer, “Thus I am a feather on the breath of God” was the inspiration for the eagle’s feathers.

St John’s Gospel says “The Light shines in the darkness and the darkness has not overcome it”. The collect for St. John also refers to light, hence the bands of gold leather, the gold and red around the eagle’s head. “Circle me Lord, keep light near and darkness afar.”